This article discusses the differences between European Burmese and American Burmese cat breeds. The controversy surrounding the differentiation of these two breeds has to do with both appearance and genetic makeup. 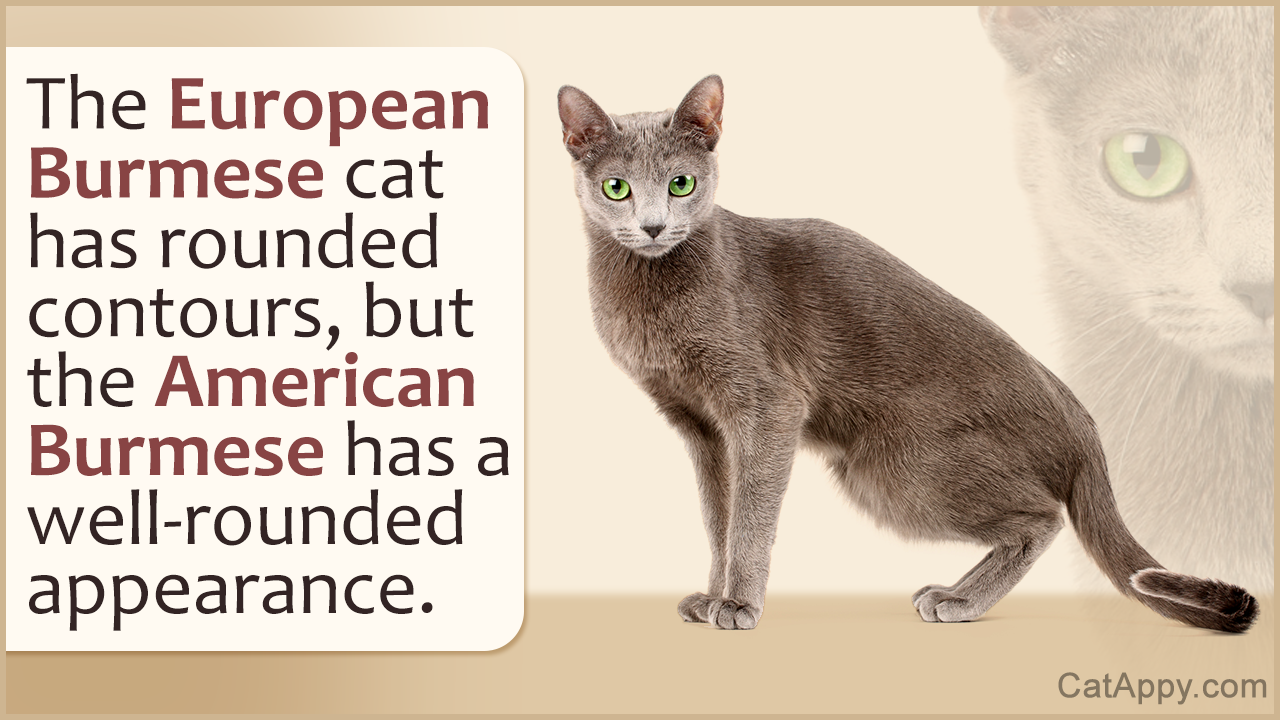 This article discusses the differences between European Burmese and American Burmese cat breeds. The controversy surrounding the differentiation of these two breeds has to do with both appearance and genetic makeup.

Anyone with even a passing interest in cat breeds has probably heard of the Burmese, a breed descended from a cat called Wong Mau, who was brought to the United States in 1930. Because Wong Mau was the only Burmese cat at the time, she was bred with Siamese cats, and her solid-colored descendants formed the Burmese breed. Today, there are actually two distinct Burmese breeds. The so-called American Burmese, has split from the European Burmese, which was bred from Burmese cats imported from the U.S. to the United Kingdom in the late 1940s and 1950s. Because the European Burmese variety was developed in England, they are sometimes referred to as British Burmese.

It is actually a matter of some controversy whether the European Burmese should be considered a distinct breed from the (American) Burmese, since the two are largely quite similar. As a result, many official cat breed lists and registries do not recognize two Burmese breeds. However, one can detect distinct visual differences between the two varieties. For example, the European Burmese has a more triangular head shape and, as a result, has a more Asian look. By contrast, the American Burmese is rounder and stockier. Aficionados of the European variety dislike this stockiness, giving further support to the existence of the distinction.

The controversy surrounding the two different types of Burmese cats has to do with more than just appearance. Proponents of the European Burmese sometimes do not recognize the American Burmese as a distinct breed with its own characteristics and drawbacks. Rather, they view the American Burmese, which they call the “contemporary Burmese” as defective for genetic reasons. A primary reason for this is that American Burmese cats are susceptible to a genetic condition called the head fault, which is fatal for cats born with it. European Burmese cats, which have generally not been bred as extensively with Siamese cats throughout their history, are rarely born with the head fault.

Hope for the American Burmese

American cat fanciers who prefer the American Burmese hope that the recessive gene that causes the head fault will eventually be eliminated. Although it would be possible to stop breeding cats who could potentially carry the gene, breeders worry that this would reduce the American Burmese gene pool too drastically to be practical. Instead, breeders hope that eventually a test will be developed to determine which cats are carriers, and then selective breeding can eliminate the head fault. Meanwhile, fans of the European Burmese consider their preferred breed to be heartier and carefully work to ensure that they do not crossbreed with the American variety.

There are ten standardly recognized colors of European Burmese, including the popular blue Burmese, which first appeared in England. Although the breed was long not recognized by associations and registries in the United States, the European Burmese has been eligible to participate in championships in the U.S. since 2002. In personality, European Burmese cats are much the same as American Burmese. These cats are very social and affectionate. They get along well with other animals, but they especially like to be involved in human activities. This makes them great pets for families with children, other cats, and even dogs. Burmese cats are quite docile, but they shouldn’t be left alone for long periods of time.