The Dragon Li is one of the first Chinese cat breeds, and is starting to gain popularity among cat fanciers. Now an internationally recognized official breed, the Dragon Li is beginning to appear in shows worldwide. Their unique appearance and intelligent personality adds to their exotic charm. 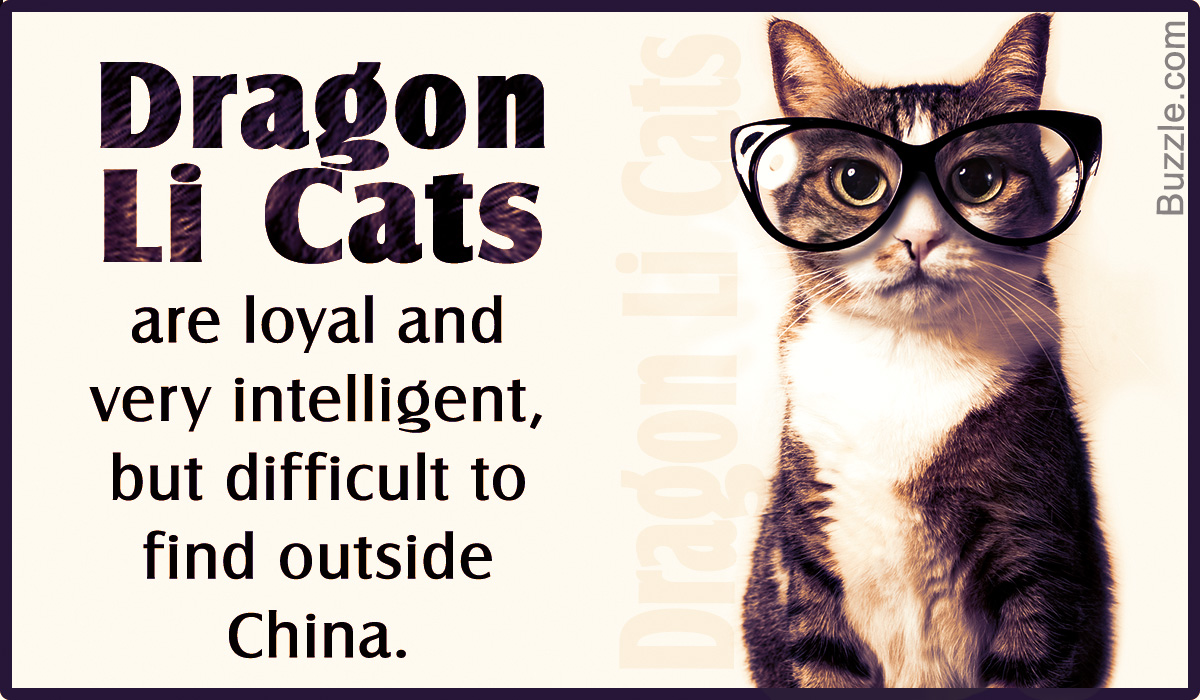 The Dragon Li is one of the first Chinese cat breeds, and is starting to gain popularity among cat fanciers. Now an internationally recognized official breed, the Dragon Li is beginning to appear in shows worldwide. Their unique appearance and intelligent personality adds to their exotic charm.

Among cat breeds, few are as exotic as the Dragon Li. Unlike many popular cat breeds, the Dragon Li is a natural breed. This means that it was not created through breeding or mutation, but evolved naturally, in China. The leading theory on the origin of this breed is that it was once a wild cat that self-domesticated, meaning that it naturally adapted to having humans around, coming to depend on them for food and care. The Chinese Mountain Cat is probably the ancestor of this breed. The Dragon Li goes by many other names, including Li Hua and Li Mao.

In appearance, the Dragon Li has a unique short coat. The breed has a tabby patterned coat in a medium to dark brown color. Breed standards specify the number of stripes that should typically appear on various parts of the cat. These cats are also recognizable by their large eyes. Their eyes can be green, yellow, or brown, but Dragon Li aficionados consider green to be the best eye color for this breed.

One interesting physical feature is the stocky appearance of the body, reflecting the self-domesticated nature of the cat. They are rectangular and muscular cats, although the females are considerably smaller than the males. These cats usually have distinctively wide paws, as well.

The personality of the Dragon Li makes sense considering its origins. These cats are loyal, but not particularly affectionate. They are known to be very intelligent, and their natural breed status means that they’re very active. They need a lot of space, and therefore is usually not recommended for people who live in small apartments. These cats are particularly good at retrieving things, and may be able to learn to bring in newspapers or fetch small objects.

It is difficult to find Dragon Li cats outside China, and they have only recently become recognized as a show breed. In 2003, these cats were added to Chinese and American cat registries, and in 2005, a Dragon Li cat won a championship in China. Cat Fanciers’ Association accepted the breed in 2010. The 2005 winning Dragon Li cat, named Needy, is well-known among cat fanciers in China. Videos of the cat can be found online, and rumor has it Needy was also the first cat to be married in China!

Currently, this breed is very difficult to find outside China. Because the breed is so newly recognized, it has not yet been extensively promoted, and is still considered by cat fanciers to be fairly experimental. As a result, there are few, if any, breeders in the United States and other Western countries. For those interested in Chinese breeds, there is also the Chinese White, although this breed has not yet had widespread official recognition. Cat fancy is becoming more and more popular in China, so more Chinese breeds are likely to appear and gain recognition in the next few years. Unfortunately, Westerners who want to become Dragon Li owners before then, may have no choice but to take a vacation to their country of origin.

As with any pet, the Dragon Li should be cared for properly. The breed has no known disease susceptibilities, and does not require extensive coat grooming, but cleaning the teeth and ears regularly is important. When they are given proper care and attention, these cats can live up to 16 years or so.