Useful Information About the Symbolic and Fuss-free Korat Cat

Korat cats are intelligent and fuss-free pets, making them ideal companions to their owners. 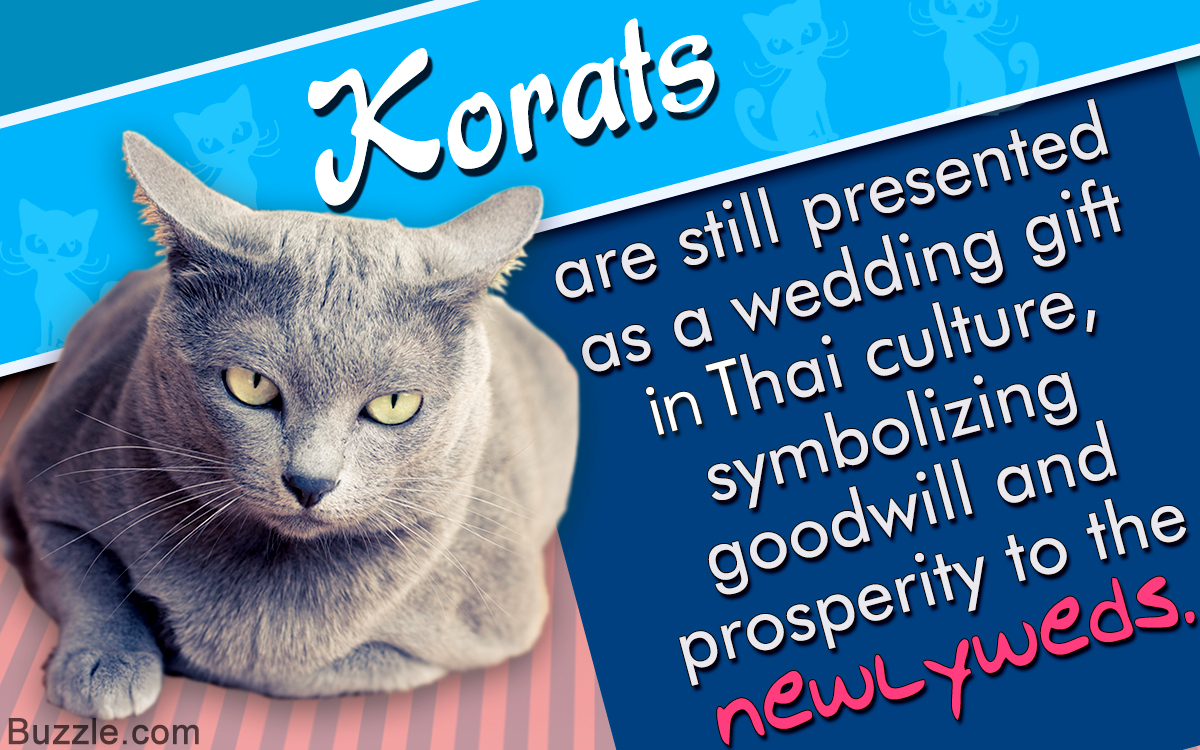 Korat cats are intelligent and fuss-free pets, making them ideal companions to their owners.

As per the literature from Thailand’s Ayutthaya period, Korat cats have been described as:
The hair are smooth with roots like clouds and tips like silver;
The eyes shine like dew drops on a lotus leaf.

The cat hails from Ampur Pimai in the Korat province of Thailand. Its earliest presence has been found in the Smud Koi of Cats, i.e., Cat Book Poems. It was considered as one of the oldest domestic cat breeds in the world.

One such noteworthy cat breed is the Korat. Many believe that these cats can charm their way into a cat hater’s heart. They are a beloved of so many people that they were and are still considered to be harbingers of good luck, prosperity, and fertility.

Their distinct coat, vocalization, intelligence, ability to learn tricks, and the habit of following humans just like a dog has made them unique in their own kind.

There are many unclear stories about how this cat breed took it voyage westwards. One such popular belief is that a pair of Korat cats called Nara and Darra were brought to America by a cat breeder called Jean Johnson in the year 1959. This pair was then bred and later introduced to a few self-blue Siamese to avoid inbreeding to increase their number. This laid the foundation for the first American line of Korats. More Korats were imported to the U.S. in the following years.

Today, Korats are recognized by the American Cat Fanciers Association (AFCA) as well as The International Cat Association (TICA).

Maturity: A point to remember is that Korats develop slowly, which means they can take up to 5 years to reach full maturity.

Body and Facial Features: They are medium-sized cats with a semi-compact body and a curved spine. They have a broad chest, wide-spaced front legs, and longer hind legs. They have been noted to have a heart-shaped head with large ears. These felines also have a heavy tail base which tapers and rounds at the tip.

Coat and Color: Korats have short, shiny, and thick fur which lies close to their skin. They are known for their distinct slate gray-blue color. Each hair has a silver tip, which gives the cat that unique halo-like effect. They have a leathery nose, lips, and paw pads ranging in shades of lavender to dark blue.

Eyes and Ears: A Korat’s eyes are large and prominent with a beautiful half-closed and slightly slanted outer tip. As kittens, their eyes are blue, but as they mature, their color turns to either amber or a brilliant shade of green. However, this can take anywhere from two to four years. A korat’s ears are large with rounded tops.

Health problems in pedigree cats as well as mixed breed cats vary. However, the most common health problem faced by these cats is genetic in nature. They often suffer from neuromuscular degenerative disease along with low body fat, which makes them highly sensitive to normal cat medication, especially towards anesthesia. Another problem is gangliosidosis, which is a lipid storage disorder affecting the brain and spinal cord.

Korats are highly social and enjoy the company of humans and other pets alike. However, they are prone to sudden mood swings and bouts of jealousy if others get too much attention. They require company and dislike being left alone for too long. They form a strong bond with their owners and love to cuddle and play. They are very energetic, affectionate, attention-seeking, smart, and easy to train. They have been found to be extra gentle while playing with children.

An interest point about the Korat cats is that they are experts at using body language to communicate with their humans. They are quite vocal when they have something to communicate.

Korats are highly inquisitive, and their need for attention can land them in deep trouble. Their slate color works in their disadvantage when they are crossing the street or sitting in the middle of it. They make easy preys to coyotes and other dogs. Therefore, it is ideal to keep these cats indoors.

Korat cats lack an undercoat, grooming these felines is quick and easy. Brushing them twice a week would ideally be sufficient. During springtime, they will require frequent brushing, which will help lose the excess, unwanted winter fur. They will also require regular ear cleaning and nail trimming, along with good dental hygiene.

The Thai spelling, or Korat, is actually Koraj. It was changed by European breeders because the Thai pronunciation of ‘j’ sounds like a soft ‘t’.

The Thai name for Korat is the color of money.

In rural Thailand, these cats are not sold, but they are one of the most valuable gifts to be presented for birthdays and marriages. These cats are presented as a wedding gift in Thai culture, symbolizing goodwill and prosperity to the newlyweds.

In Thailand, these cats with kinked tails are said to bring extra luck.

Korats are particularly gifted with heightened senses of hearing, smell, and sight, making them very sensitive to loud and harsh noises.

Korats are the only cat breed that has a heart-shaped head.

Korat cats are often allergic to antibiotics. It is also very sensitive to calming resources, especially painkillers. A normal cat dose has a stronger impact that lasts longer on Korats.

Since Korats come from a tropical country, they don’t have a full underfur. Thus, they love and require warmth, and need to be protected against cold.

Korats are a highly intelligent cat breed that can easily learn how to play fetch, walk on a leash, open the doors, and use taps.

Korats make ideal pets for first-time cat owners, people with older children, and those with other pets. If buying these cats is out of question, you could also rescue these fascinating felines from Korat rescue centers.